Ms. Bekele has been invited to serve on various Boards and Committees of public and private institutions, throughout her career and had Honorable mentions from her Country and others on her work.

Ms. Bekele has been invited to serve on various Boards and Committees of public and private institutions, throughout her career and had Honorable mentions from her Country and others on her work. 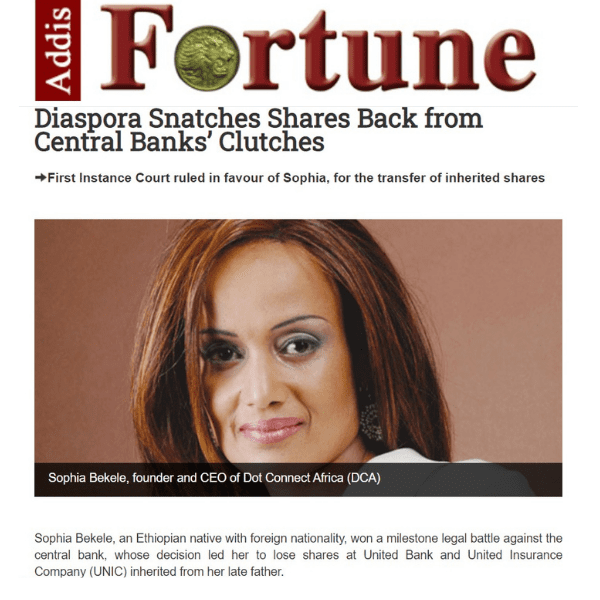 2021: Bekele received Honorary Illustrative Awards for her contributions in her Industry and community in Multiple Continents, US and Africa from the Silicon Valley Business Journal and the CEO Today Africa Awards.

2018: Bekele received a Champion of Development Award by the AfricaLink Solidarity Awards in Switzerland

2017: UN ITU and UN Women recognized Miss.Africa Digital founded by Bekele as finalist in its  Equals in Tech Awards

2016: Bekele is noted among Eight most influential Women in the Tech Scene

2016: Bekele was recognized among the Notable alumni of Nazareth School

2013: Bekele was enumerated as “African Women to Watch” by Bloomberg TV, a prime TV program that “celebrates the most fearless, competitive and visionary African women of our time”, and explores “the women working hard to close the gender gap and shaping the continent’s social, political and economic landscape”

2013: Sophia Bekele was named among Top “50 Trailblazers-Our Made in Africa” along side US President Barrack Obama and others by special “Collector’s Edition” of UK’s “NewAfrican Magazine”an IC Publications group.

2013: Bekele was nominated for the TransformAfrica 2013 Continental Excellence Awards in ICT which was hosted by H.E Paul KAGAME, President of the Republic of Rwanda in Kigali and Dr. Hamadoun Toure, the Secretary General of the International Telecommunication Union (ITU)

2005: Bekele was presented with the Paul Harris Fellow award for her contributions in the various works of International Rotary Clubs

2005: Bekele was recognized, along side women in the Ethiopian Federal Parliament, government women ministers and women investors and company executives, in recognition of her entrepreneurship and corporate leadership. – Ethiopian Herald